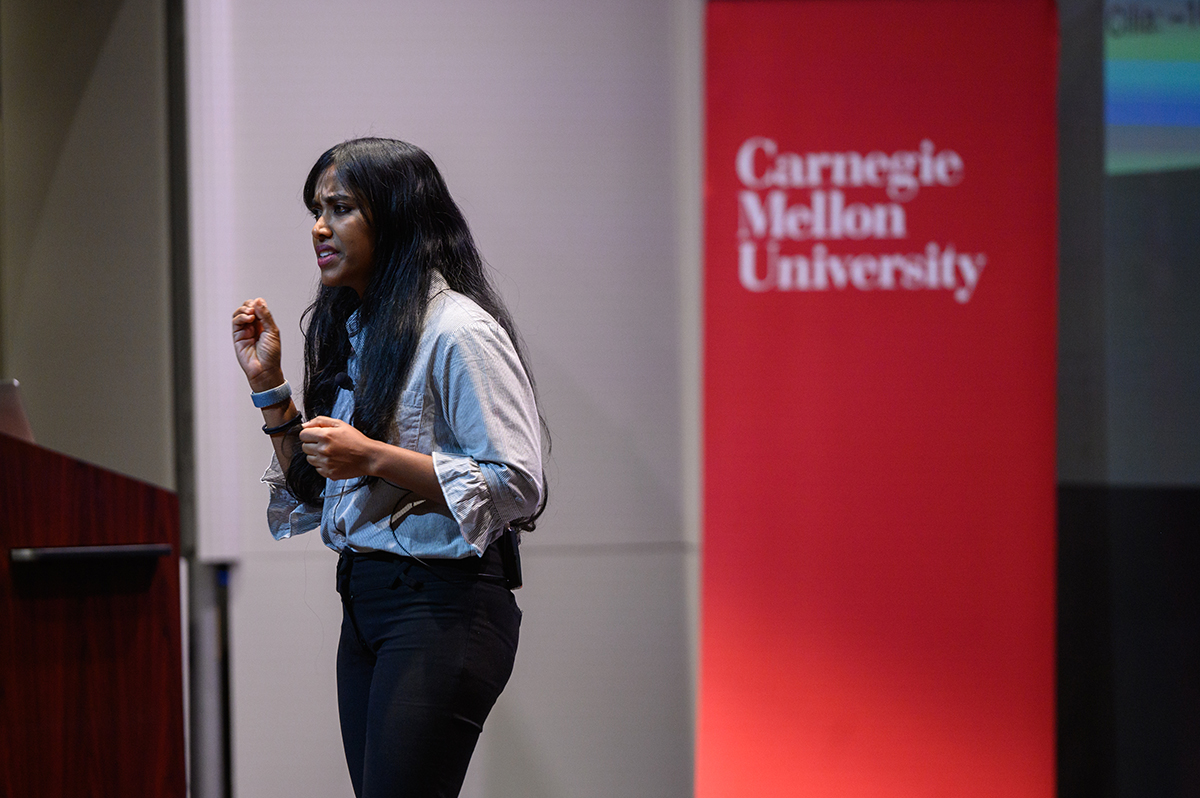 Eight doctoral students explained their years of research and its importance in under three minutes during the finals of Carnegie Mellon University's Three Minute Thesis (3MT), held Wednesday in the College of Fine Arts' Kresge Theatre.

First place went to Piyumi Wijesekara from the Department of Biomedical Engineering, second place went to Suzy Li, who is studying architecture in the School of Fine Arts, and third place went to Emma Benjaminson of the Department of Mechanical Engineering. The People's Choice Award — selected by the audience in the theater — went to Mohammad Ayaz Masud, who is studying electrical and computer engineering. Materials science & engineering student Amaranth Karra was selected as the Alumni Choice Award winner by online votes from alumni watching the livestream.

The event, which returned for its seventh year at Carnegie Mellon, after a two-year break due to the pandemic, started at the University of Queensland in 2008 and has been adopted by hundreds of institutions. Keith Webster, the Helen and Henry Posner, Jr. Dean of the University Libraries, who brought the competition to CMU, served as host of Wednesday’ finals.

Wijesekara, a doctoral student in the College of Engineering whose research involves engineering mini-lung tissue to study lung biology, lung diseases and targeted therapies attributes her success to the timeliness of her topic. Having an accurate lung model is critical to respond swiftly to public health crises like COVID and makes us better prepared for another pandemic.

“Since I’m doing research on a topic that is relevant at this time, that probably made me stand out to the audience and judges,” Wijesekara said. “We are still in a pandemic and are in dire need of inventing or engineering models to come up with solutions for this pandemic. Since everyone has gone through this tough time, maybe they can relate to this problem more.”

Masud, also from the College of Engineering, is working on a breakthrough memory device that will enable high density storage with minimum energy expenditure. His lab mate encouraged him to compete in 3MT, which he found to be a fun and valuable challenge. After the experience, he encourages other grad students to participate in 3MT.

“It was fun to talk about my research and to get the People’s Choice award feels good, but the biggest reason to participate in 3MT is that you can spend a lot of time thinking about your research not to present to a committee or to professors but to present to a general audience,” said Masud. “That allows you to discover the most important parts of your research and makes it a really enjoyable process.”

Like first-place winner Wijesekara, who overcame her fear of public speaking by practicing her presentation in front of audiences of friends and colleagues, second-place winner Li participated in 3MT to become more comfortable with public speaking, which she says is a valuable skill for PhD students of any discipline.

Li, who presented a talk on her research into creating smarter urban surfaces to bring benefits to climate change, human health and social equity, had previously participated in the 2020 3MT preliminary rounds, which were prematurely cut short due to the pandemic. She did not win her preliminary round that year and in the two years since, she continued to refine her presentation and sought help from the Student Academic Success Center.

In the end, it’s all worth it if she’s able to get her message out to a broader audience.

“Urban surfaces – roofs, streets and parking lots – are so common, they are everywhere,” Li said. “This topic is relevant because we are now facing urban heat and flooding problems everyday. I hope the data points I shared in the presentation catch people’s attention and make them realize that what a big problem we’re facing. It will be good if my presentation makes people start to think about this topic.”

The 2019 Three Minute Thesis Championship was held at Kresge Theatre on Tuesday, March 26.

Read more about the 2019 finalists 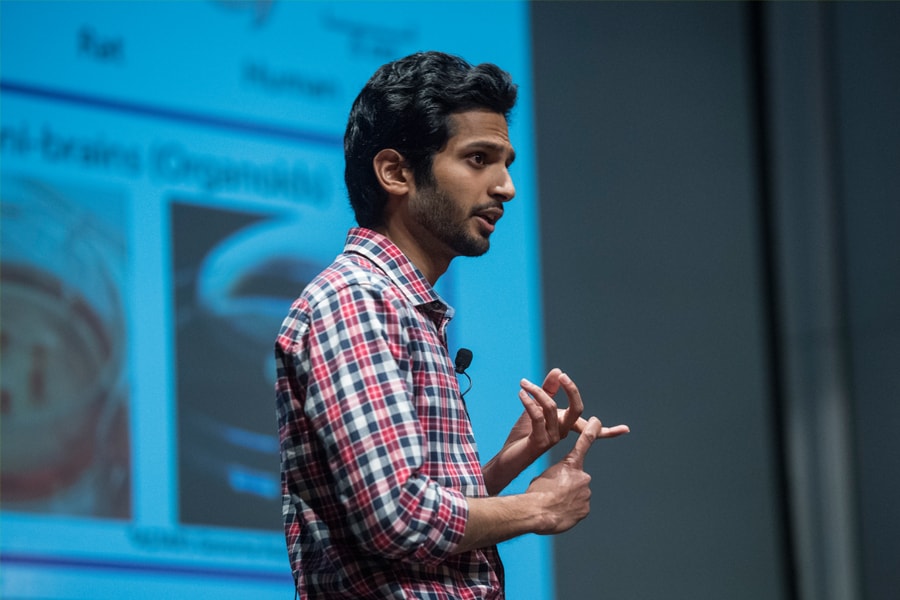 Doctoral students took the stage at Kresge Auditorium to describe their research and its significance in three minutes or less during the finals of Carnegie Mellon University's Three Minute Thesis competition.

First place and the People's Choice Award — selected by the live audience — went to Will Penman from the Department of English. Second place went to Navid Kazem, who is studying civil and environmental engineering, and third place went to Ardon Shorr from the Department of Biological Sciences. Biomedical engineering student Sahil Rastogi was selected as the Alumni Choice Award winner by alumni watching the Facebook feed.

The event, in its fifth year at Carnegie Mellon, started at the University of Queensland in 2008 and has been adopted by hundreds of institutions in more than 57 countries. University Libraries Dean Keith Webster, who brought the competition to CMU, served as host of Tuesday's finals.

The first-, second-, and third-place winners were all repeat participants, who had competed in at least one other Three Minute Thesis competition.

For first-place winner Penman, whose presentation invited the audience to participate in a call and response exercise, this was his second attempt.

"For me, this year it was about having a sense of fun attached," Penman said. "A lot of times, academic research can be kind of dry, so I really wanted to have this sense of being called into something. I'm calling the audience into a call-and-response and that mirrors what I'm doing in my dissertation to think about race and being called into a deeper interaction."

Shorr, a doctoral student in the Mellon College of Science who was a finalist in CMU's first Three Minute Thesis competition, also was participating in his second championship.

"My first Three Minute Thesis talk was about why so many astronauts return from space with health problems," Shorr said. "This time, as my work has evolved, I'm talking about how we can learn about proteins in the body using astronomy software. It's a story of building tools by learning from other fields."

As a co-founder of the student group Public Communication for Researchers, which helps graduate students explain their work and why it matters, and a former presenter at TEDxCMU, Shorr approached the finals with experience in public speaking.

"The reason I wanted to compete was to step outside of my comfort zone," said Viegas, who presented her research on stuttering. "Even if you have great research, but don't communicate it properly, not even peers will be able to build upon your work. So I wanted to challenge myself and make my research topic understandable for everyone. Preparing for the preliminary round made me feel uncomfortable, but participating showed me what can be achieved."

Kazem said he wanted the audience to understand the interdisciplinary nature of his work, which features elements of mechanical engineering and physics. His experience in the Three Minute Thesis preliminary rounds in 2016 and 2017 prepared him to take home a prize this year.

"I made it so much simpler," Kazem said. "If you look at my presentation last year, it was too complicated. I learned that there is not enough time to go in depth on your topic. Keep it as simple as possible." 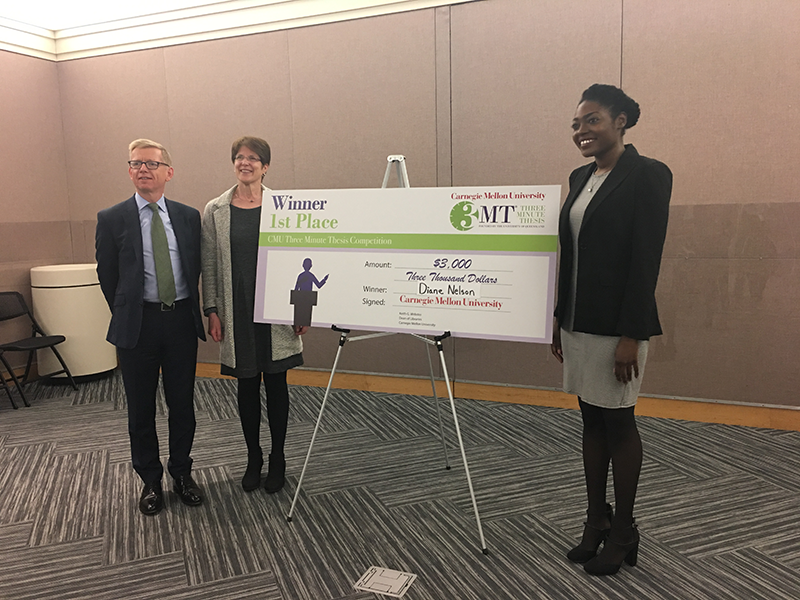 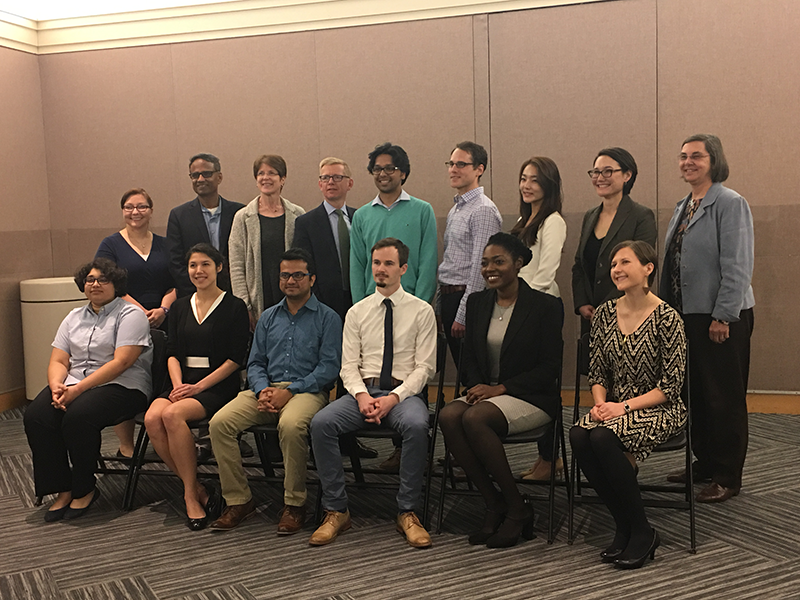 Ten Ph.D. students representing four CMU schools and colleges competed in McConomy Auditorium for the 2017 Three Minute Thesis Championship. For the first time, the competition was streamed live online, where alumni viewers had the chance to vote for the new Alumni Award. Thanks to all of the competitors and judges and congratulations to the winners!

Will Penman, English, Dietrich College of Humanities and Social Sciences 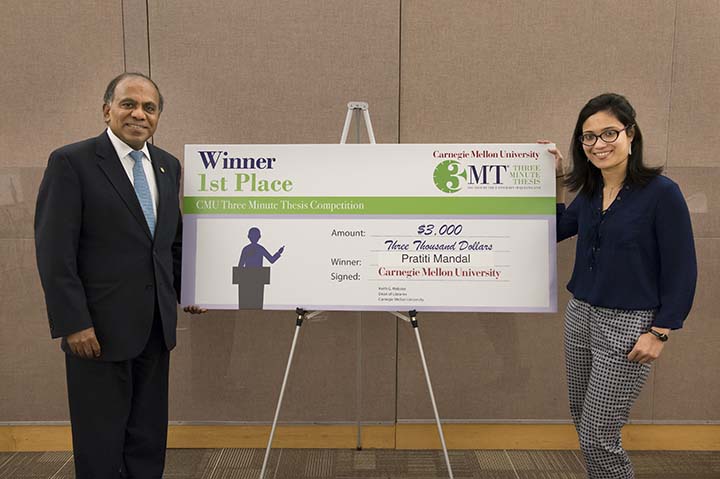 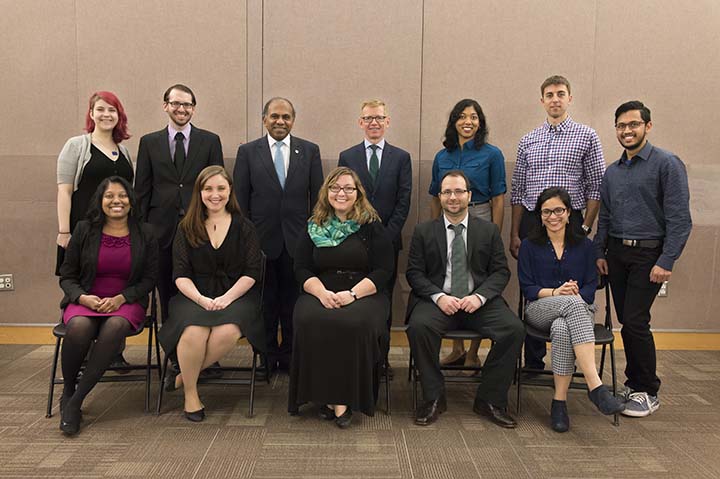 Congratulations to Pratiti Mandal (1st place and People's Choice), Juliann Reineke and Shinjini Kundu (2nd place tie), and Amit Datta (3rd place), as well as the rest of our 2016 3MT Championship students. Ten students competed in this year's Finals. Who would have gotten your vote?

Finalists who participated in the 2016 Championship:

Juliann Reineke, English: Three sheets to the wind: the Jolly Jack Tar and British Masculinity in the 18th Century

Jonathan Kush, Tepper School of Business: Ties than bind and ties that tear: the influence of network centralization and density on shared social identity and performance

Amit Datta, Electrical and Computer Engineering: Discovering personal data use on the web

Watch all of our 2016 Finalists

Check out the CMU home page story on the 2016 Three Minute Thesis Competition.

Finalists who participated in the 2015 Championship:

The first-place winner was David Rollinson (Robotics Institute, SCS), who presented his thesis Snake Robots in the Wild!

Second place went to Suchitra Ramachandran (Biological Sciences, MCS), who presented The Brain as a Statistician.

Third place went to Patrick Foley (Statistics, DC) and his thesis Statistics and the Human Connectome.

In an audience vote, Ramachandran and Arun Shrivats (Biomedical Engineering, CIT) with the thesis siRNA Therapeutics for Fibrodysplasia Ossificans Progressiva tied for the People’s Choice Award.

Eleven Ph.D. candidates made it to the final round out of 140 initial registrants. The competition, brought to CMU by Dean of Libraries Keith Webster, challenged the doctoral students to present their thesis in three minutes or less in language understandable to a general audience.

Watch all the 2014 finalists